A most excellent toy 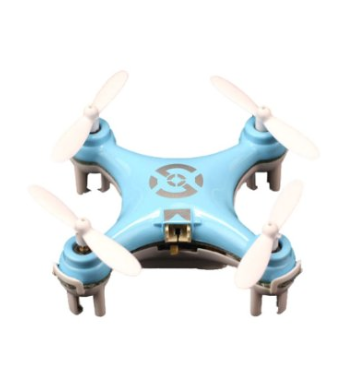 It's $23 bucks on Amazon. It actually flies and is controllable. You can get spare parts for cheap, and it comes with 4 replacement props.

Onboard battery lasts a few minutes, recharges via the USB cable, controller takes 2x AAA and seems happy with Eneloops. It's small enough to sit in your palm, so you're not going to hang a GoPro from it, but it flies and is stable enough with the trim to actually be fun.

Took me a single flight to get the hang of it, and once I do a few more I can enable loops and flips in the controller. Not a kid toy by any means, but a very well priced gadget for ex-pilots like myself.

So I was initially thrilled with Statiked. Super-responsive developer, github hosting, nice GUI app, easy to post, all I need to do is copy over my folder of already-in-Markdown posts, right?

No. Statiked is v1.0 and is an examplar of the agile idea of MVP, or minimum viable product. It works, it does the essentials and it's shipping. I've got a few hundred files, and that causes problems.

Right now, I've got a couple of astonishingly baroque regular expressions to fix images, and some rules of thumb for Markdown flavors, but Statiked has a showstopping bug right now: If you try to generate the site, if a single file fails to generate, it just stops. It doesn't tell you which file.

So yeah, I have 2005 painfully imported, and 2006 mostly done, but other posts are gonna have to wait until that's fixed.

It is nice to be able to write again, though.

You think it'd be easy: Post an image that links somewhere. It's not.

Not sure where the bug is. Pardon me while I poke and experiment here: Which works on markdown viewer. Talked to Statiked support and it is a library problem, they use MMMarkdown and it doesn't support nested syntax. Yet.

So I have to use inline HTML. Let's try that:

OK, we have a workaround!

This regex will find them:

and this will replace them, using the Komodo Edit v8 backslash syntax:

The blog platform and server are now both changed - I've been using Octopress and self-hosting, but the Rake-based workflow was painful and slow, and while I don't regret funding the Ghost project they still haven't had time to add file import, so here's Plan B for now:

to Statiked as an editor to GitHub Pages for hosting. Why? Because it's supported by Statiked. ;)

Just had a nice debug call with the author of Statiked... gotta love indie developers! We did a screenshare and debugged the problem I was having. Turns out that the GitHub API he uses can't handle the two-factor authentication I had enabled. Disable it and voila.

So here we go. Pages now hosted on github, and I'll see if I can import the old writing from Octopress.

doesn't parse the timestamps unless you have the '-0700' timezone offset. Odd. (Link to is the ebay seller who sold it to me.)

Bad news first - it's not really a moonphase. And it doesn't have a seconds hand. That's a hairspring window, not a tourbillon.

Then again, it was $40USD. So I'm inclined to cut it some slack. I had wanted to check out pocket watches, but since I am pretty sure that it'll be a passing fad, I didn't want to spend much money on one. You can easily find vintage Elgin and Hamiltons on ebay, but I decided to get one new so that it wouldn't require immediate maintenance. (Finding someone to work on a mechanical clock is not easy!) As with my skeletonized watch, cheap and Chinese is the answer.

The hairspring and balance wheel are visible, and you can see most of the pallet fork oscillating as well. It's quite fun to watch, pun intended. The two subdials are both 24hr indicators, of different sorts. The one on the left just has all 24 hours printed on it, with a simple hand pointer. The one on the right rotates at the same speed, but is printed with a day/night sort of thing. It looks like a moonphase until you look closely; this is the sort of corner-cutting you expect from cheep-and-cheerful gear. A moonphase (28-day cycle) is more complicated; if you have that the watch usually has day/date as well.

As with the skeletonized wristwatch, the display is busy and not instantly readable. Not bad, just not the instant read of a dive-style watch.

It comes with a pocket chain, pocketknife and integrate desk stand. It's kinda cool to stand it up on your desk and watch the works of the balance.

The works are pretty quiet; you have to hold it up to your ear to hear the tick-tock. It looks like 5 or 6 beats per second. 17 jewels, no printing on the back, side winder stem, not waterproof.

Accuracy is hard to measure without a second hand; I've had it a couple of days and the error is not yet visible.

Helbros is an old brand; I'm guessing that (along with others) it was bought by a Chinese company to give them instant credibility.

A perfectly reasonable, and very affordable, pocketwatch. Pocketwatches are, of course, an absurd affectation in this day and age. If you get one, it's probably just for enjoyment and odd occasions. I kind of like how it changes your sense of time - when you have to remove the watch from your pocket to look, it's a bit different than just glancing at your wrist.

So George Bush wears a $50 Timex, and Berlosconi wears a half-million-dollar Vacheron.

Pravda dishes the dirt on world leaders and watches.

Amusing to note that Putin's watch costs one year of his official salary.

The Value of Time

The origins of watch collecting are rooted in the utilitarian. When the social time coordination instrument was the village clock, social units tended to cluster around the village square. With the rise of portable, reliable watches, the individual was freed to roam independently from the center of town, and yet remain in sync with the rest of humanity. Today, with the ready availability of completely automated, mass-produced electronic watches, the raison d’etre of a fine mechanical timepiece no longer lies primarily in its timekeeping function. Today, the keystones to value in high mechanical timepieces are set in the perceived values of craft, the reconciliation of tradition and innovation, and their much more fascinating roles as a form of kinetic art and signatures of personal style.

An interesting editorial on Worth.com about watches. More oriented towards collectors and such, but has some interesting bits.

I have a Squeezebox v1 for some months now, setup to play music streamed from my Mac mini. It (the squeezebox) has been flaky ever since I got it, where it'd simply lose the connection after a while and have to be power-cycled to recover.

Somewhere between annoying and unusable, actually.

So today, based on an idea, I took a WRT54GS, set it as a client to my main wireless router, and plugged the squeezebox into the linksys.

End result: Using the wired connection on the squeezebox seems more reliable than the wireless side. Odd, that.

Still messing with other variables, such as whether or not I leave itunes running. Now that I have podcasts to fetch, that's more of a necessity. However, it seems like the re-scans of the itunes library may cause playback glitches.

UPDATE Dec 16/05 - yep, using the bridge seems to fix the flakiness. Looks like the wireless part is just flaky.

UPDATE 5/07: Changing base stations to an Apple Airport Express also fixed the problem. I had to return the Linksys anyway, as it was a loaner. Stable now for several months.

bbLocal is a full client for Google Local.

What is it with men and their watches?

...is the title of this Guardian article. Not many conclusions, but worth a read. I agree with the author that our relationship with our watches has gotten more complicated.

S/he also hits the 'watches as jewelry' point that I mentioned.